Our basement, like so many others in the Atlantic region, flooded during this week’s torrential rains. We are fortunate. Our damage was largely luggage, clothing, tools and other replaceable items. We stored very few pictures downstairs and after running the washing machine non-stop for a few days, clothing has been retrieved. Since—surprise, surprise—the flooding is not covered by our insurance, the flooding is going to be expensive in terms of replacement cost and the time it will take to clean up, but we are grateful it was not worse. The biggest loss has been books.

We are enormous fans of used bookstore. We don’t seek the latest best-seller at a discount. Instead, we search out old books, those that you can’t find anymore. Books that beam out wholesomeness and innocence. Books about healthy families and friendships with a noticeable absence of perversion and profanity. One sad victim of our flooding was a box labelled, “Teenage girl books,” that was waiting for our granddaughters to get a bit older. 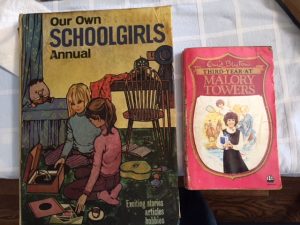 After a tiring day of clean-up, I curled up in bed needing even more distraction than reading provided. A few weeks ago in a Musing I mentioned the 1960s TV show Family Affair and a search of Amazon Prime showed that it was available for viewing with a click of the mouse. I clicked.

The episode I picked was highly entertaining, not least because it went no longer than two minutes at any point from start to finish without triggering politically correct current thinking. For example, six-year-old Buffy, plays with her doll, Mrs. Beasley while her twin brother, Jody, dances an Indian war dance. This manages to both trample on Native American sensitivity and at the same time promote gender stereotypes.

But the most fascinating part, to me, was how six-year-old Jody was allowed to wander his Manhattan block unescorted, the only admonishment being that he should not cross any streets. Like many other shows of the day that featured children, the plot lines of Family Affair seemed perfectly plausible to me. While my home did not include an English butler or a bachelor uncle, neither of those scenarios were fanciful as, let’s say, the talking horse in Mr. Ed or the extraterrestrial visitor in My Favorite Martian. It certainly did not seem ridiculous to me at the time that a six-year-old would be trusted to go out and about needing only to be home for dinner. That was exactly how my friends and I lived.

We knew not to get into a car with strangers, but had no qualms about being around our friends’ fathers or older cousins or independently roaming the neighborhood. When, in the TV episode I watched, Jody brings a rather disheveled looking man (who naturally will turn out to be the business associate his uncle has been desperately trying to meet) back to his apartment for milk and cookies, it is treated as unconventional rather than sinister.

I know that terrible things did happen in the “good old days.” Predators are not a new phenomenon and there were children whose lives were shattered by perverts. But the assumption when I was growing up was that, unless otherwise indicated, relatives and neighbors were good and life was safe.

Older books, like older TV shows, sometimes do have stereotypes and language of which I disapprove. Many focused on a “normality” that wasn’t universal. There are also some areas in which I think our society has advanced and I have no problem pointing that out to a young reader. But it is important to be reminded that what we think of as normal today, isn’t necessarily so. Children being constantly scheduled, supervised and surrounded by dysfunction should not be taken as progress but rather as the deterioration it is. Children being suspicious and fearful of any stranger  they come across in their daily lives or who, Heaven forfend, smiles at them, isn’t an improvement. I will miss my water-logged, cherished books that presented a picture of safe and sane daily life rarely seen in newer volumes.

P.S. You may have noticed a new section titled “Practical Parenting” under the Susan’s Musings heading at the top of the web page. I’d love to hear what you think of it.

P.P.S. If your family, like ours, picks your video watching carefully, I (in a completely biased fashion) want to recommend our Ancient Jewish Wisdom TV Show DVD. My husband and I love taping these shows and have collected four favorites to make available. Volume 3 is on sale right now!

P.P.P.S. Much thanks to those of you who responded to our summer appeal for the American Association of Jews and Christians (AAJC). AAJC sponsors Thought Tools, Ask the Rabbi and many other of our activities. To read about AAJC, click here.