What parent, at one time or another, hasn’t wished for an absolutely reliable, invisible lie-detector? What business professional interviewing a potential hire hasn’t wished for exactly the same thing? Now I know what you’re thinking. ‘Invisible’ is impossible. True, but so is ‘absolutely reliable lie-detector,’ so I saw no harm in adding ‘invisible’ to the wish list.

It is true that stress can cause various physiological responses like elevated blood pressure and sweating. It is also true that these can be measured by a polygraph but for good reason, most legal jurisdictions allow polygraph results only for investigatory purposes, not for gaining a conviction. Factors other than lying can cause the same physiological responses and too many people can lie without presenting these physical reactions.

In 2007, the International Journal of Speech, Language, and the Law published an article entitled “Charlatanry in Forensic Speech Science” which pretty much debunked the idea of machines identifying liars. However, that does not mean that you can’t tell when someone is lying. It just means that machines like polygraphs, voice analyzers, and software apps claiming to do this with certainty, are, well, lying.

There are many things that machines cannot do and at which people can excel. Only humans can compose music that will produce an overwhelming emotional response in the listener. Machines can cut down the number of job applications that an employer has to read, but only a human can sense the intangibles of a match when making the hire.

Just as knowledge, training and practice make one a better composer and a better hiring manager, so they also make for better human lie detectors. Here are three of the most useful facts that ancient Jewish wisdom reveals about distinguishing truth from lies.

The Hebrew word for truth, EMeT, reveals this reality: 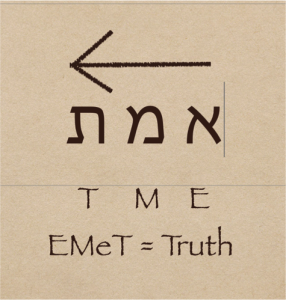 It comprises, in sequence, the first letter of the Hebrew alphabet, the middle letter, and the final letter. The message is that truth fits into the entire story from A to Z as it were.

Whereas the Hebrew word for a lie, SHeKeR, looks like this: 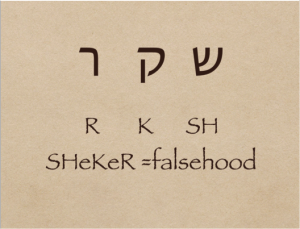 This word is made up of the 2nd last, the 4th last, and the 3rd last letters of the Hebrew alphabet. Since truth and lies are so incompatible, the last letter, having already been used for the final letter of EMeT, truth, cannot be used for falsehood. That leaves the next three letters, jumbled up to indicate that lies never go from A to Z but rather from Y to W to X.

However, the first three usages of falsehood, SHeKeR in the Five Books of Moses are diverse.

Genesis 21:23 Avimelech beseeching Abraham not to deal falsely with him

Exodus 5:9 Pharaoh imposing heavier work on the Children of Israel.

Ancient Jewish wisdom points out that there is only one way of telling the truth but many ways of lying. This beautiful idea is even embedded in the English language. We might ask a child, ‘Are you telling me THE truth?’ but we’d say, “Are you telling me A lie?” Only one truth, but many lies.

In other words, we tell the truth completely naturally. However, we lie in countless different ways as we assume the different personalities of each lie.

We expand further on the truths that emerge from these two Hebrew words in one chapter of our book, Buried Treasure; Life Lessons from the Lord’s Language. The other twenty-eight chapters unwrap many more words yielding principles with which to improve your life. Our dear friend Pastor John Hagee of San Antonio provides the preface to this unique book that you can get right now at 20% off.

1 thought on “Truth and Lies”