A few days ago, we observed the 25th anniversary of the passing of my revered father, Rabbi A. H. Lapin, senior rabbi of the United Hebrew Congregations of South Africa, chief rabbi of the Gardens Synagogue founded in Cape Town in 1841, and founding rabbi of Congregation Am Echad, San Jose, California. But to me, his oldest son, all those distinctions are far less important than for me simply to say, “He was my teacher.” 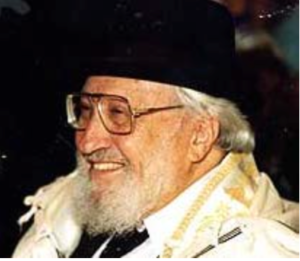 On the day before he returned home to God, I had a terrible premonition and cancelled part of a trip in order to return home early. That evening I spent in his company in Los Angeles where he was teaching a Bible class in my community, and took him to the airport the following morning.  He died soon after he returned home to my mother in San Jose later that very morning.

Immediately I jumped on a plane and flew to join my mother and to prepare to escort my father’s body to burial in Jerusalem.  All I could think about all the way to San Jose, sitting in my airline seat in total shock, was, “Did I make most use of the time that God gave me with him?”

Until my parents sent me to Bible College or yeshiva in Jerusalem when I was twelve, my father was my only teacher.  As if it were yesterday, I remember sitting across from him at his desk in his smoke-filled study (Yes, he smoked heavily until I was 10 and complained that the smoke hurt my eyes. So he stopped.) I’d have a Bible open in front me from which I’d read verse-by-verse, first in the Hebrew original and then translating it the best I could.

My father corrected my Hebrew reading when necessary and then helped me with the translation, nudging me towards recognizing the root structure upon which every Hebrew word is based, after which the meaning usually fell into place.  But that wasn’t the only way in which he equipped me with the tools for Biblical exegesis.

There are the musical notes beneath each word providing sophisticated punctuation.  More importantly however, these notes are part of the system of maintaining the accuracy of the texts.  The introduction to a Bible printed in New Jersey in 1791 contains these words by one of the signers of the Declaration of Independence, John Witherspoon:

“To the Jews were first committed the care of the sacred Writings, and for many ages they were in a manner confined to that chosen people. There was then no need of translations into other languages; yet was the providence of God particularly manifest in their preservation and purity. The Jews were so faithful to their important trust, that, when copies of the law or the prophets were transcribed, they observed the most scrupulous exactness…”

The musical notations specify just how each word should be chanted in accordance with the timeless truths of ancient Jewish wisdom.  Those too my father taught me.  And here is one of his many unforgettable lessons concerning the ‘ta’amei haMikrah,’ the tunes of the reading.

The rarest of all the 40 or so musical notes is known as the shalshelet, or the chain, because its appearance is that of a piece of chain comprising 3 or 4 links.  It appears only four times in the nearly 80,000 words of the Five Books of Moses.  It imparts a long, drawn-out, quavering quality to the word beneath which it is found.

I’ll do for you what my father did for me.  Instead of telling me why there are only four occurrences of the shalshelet, he showed me the four locations and asked me to try figure it out for myself.  Here they are:

(Genesis 19:16)  The angels are rushing Lot and his family out of the doomed city of Sodom but Lot lingers.  That word ‘lingered’ rides on a shalshelet.

(Genesis 24:12)  Abraham’s servant praying to God for success in his mission of finding a wife for his master’s son, Isaac.

(Genesis 39:8) Joseph refusing the advances of Potiphar’s wife in her attempts to seduce him.

(Leviticus 8:23) Moses is slaughtering the ram as part of the ceremony inaugurating Aaron as the High Priest.

All those years ago, as a young boy, I paged backwards and forwards comparing and contrasting the four incidents.  I quickly noticed that in all four instances, the shalshelet appeared beneath the first word of the verse.  From this I deduced that the implications of the shalshelet lay upon the entire verse and my father nodded his assent with a proud smile.

Then I hesitatingly suggested that the way the shalshelet directs us to take quite a long time to chant that one word might suggest that the actions described in each verse were not done promptly.  The angels might have been rushing Lot but perhaps he had grown unwholesomely attached to the evil city of Sodom and exhibited a reluctance to leave. My father began to grow excited for me.  “Carry on,” he urged.

Well, maybe Abraham’s servant might enjoy elevated prestige in his master’s service if Abraham never has a grandson to dote upon. Maybe the servant is not throwing himself into the prayer for a wife for Isaac but instead, he is holding himself back a bit.

At ten years old I was a bit unsure of the third example or maybe I was just embarrassed to spell out the details of sexual attraction but in any event, I skipped it and went to the fourth example.  This one was easy; Moses was now establishing his brother as a high priest.  Up till now, Aaron had been Moses’ right hand man.  It is understandable that he might linger a little on the ceremony granting Aaron prestige and prominence in his own right.

I recall how delighted my father was with this and he gently prompted me to say how the identical dynamic impacted Joseph.  As much as Joseph knew that dallying with his master’s wife was wrong, he was powerfully attracted to his desirable seductress and hesitated ending the encounter.

But my teacher didn’t leave it there.  No, he continued by explaining to me the purpose of highlighting these four stories with a shalshelet.  It’s unrealistic to aspire to the inhuman level of never yearning for something wrong.  On the contrary, God created us as imperfect humans with imperfect desires.  God wants us to feel everything passionately but to resist all unworthy action.  The Bible does not suppress the inappropriate thoughts of its heroes; it teaches that in spite of the tug towards the negative, they remained true.

What impossibly high standards my father, my teacher set for me.  But even though it may seem futile to aim for the stars, doing so might just get one higher than aiming merely for the moon.  He may be gone in body these past twenty-five years but in spirit and in his teachings, he lives on as alive and as vital as when I sat before him as a ten year old boy.