Today, I originally planned to write about immigration, which I would categorize as a political topic. But then, I started baking the Purim cookie known as hamantashen and things went so wrong that I thought I should share that experience with you.  I would categorize that topic as a family/personal Musing. While I much appreciate the regular feedback I get on my Musings, very, very, very few readers actually write comments on our website. I have no way of knowing if more people grimace in disappointment when the topic is political or social or whether a greater number shake their heads when I get personal, muttering, “I don’t really need to hear that.” So, until thousands more of you comment letting me know where your interests lie, I will continue to write about whatever is plucking at my mind and heartstrings.

I just spent four hours making cookies that are not as beautifully shaped (pictures below) and possibly not even as tasty as ones I could buy for $2.99 a dozen. If you don’t understand this, you are probably not female and cannot be (on this issue at least) what Anne of Green Gables would call a kindred spirit.

We celebrate Purim, the Feast of Esther, this coming Sunday. It is a one day celebration that actually lasts for over two weeks. From the beginning of the Hebrew month of Adar, until the holiday falls two weeks later, Jewish schools and homes are full of fun. Carnivals, singing and games abound, and young and old spend an inordinate amount of time planning costumes to be worn on Purim. At its most basic, this recalls the idea that Queen Esther did not disclose who she really was when taken to the king’s palace. Little girls usually love dressing as princesses and brides somewhat in keeping with the original tale. However, if you live near a Jewish community and on Sunday see Darth Vader or a robot or a Smurf walking around, you’ll realize that current costumes do not necessarily relate to Persia of thousands of years ago.

Aside from the optional wearing of costumes, a number of other things make the day special. We listen to a recitation of the Book of Esther, once in the evening (this year Saturday night) and once during the day (this year Sunday). We give gifts of charity to the poor and enjoy a festive meal, usually in the company of family and friends. My cookie baking episode stems from another unique Purim celebration. We give gifts of food to each other, called Shalach Manot. All these observances serve the purpose of binding people closer, recognizing that God granted the miracle of Haman’s destruction only after the Jews followed Esther’s request to gather together, to unify.

While, technically, the requirement is to give two items of food to one other person, almost no one limits themselves to that. Not only do most of us increase the quantity of both food items and recipients, it is not at all uncommon to use this gift as an opportunity for creativity. Some of us like creating themes, such as one of my daughters who this year is presenting grated items such as cole slaw and carrot kugel based on the theme, “Make Purim Grate Again.” Unfortunately, this year I drew a blank on thinking of a theme. I’ve been under the weather for over a week and have somewhat of a Winnie the Pooh brain – fuzzy. Cleverness has not been a feature of my life. (Though if you noticed the second literary reference, that is because I am in charge of games for our festive meal and the theme is ‘pen names,’ so that’s where my mind is at when it is working.)

Feeling a little more energetic this morning, I decided that at least I could bake hamantaschen to give away. The name itself refers to the villain of the story, Haman, and this poppy-seed filled triangular shaped cookie has been associated with the holiday since at least the 1500s. I have made hundreds of these over the years, though not being a poppy seed fan, I fill mine with chocolate.

Pulling out my tried and true recipe, I noticed that I was running low on flour, though it looked like I would have enough for one batch. I dutifully mixed the flour, salt and baking powder, following the instruction to combine dry ingredients. In a separate bowl, I prepared shortening. That is when I made mistake number one (I did tell you my mind has been fuzzy). Instead of creaming the shortening with sugar, I looked at the sugar, said, “That’s a dry ingredient,” and added it to the first bowl. So, I now have a plastic bag filled with four cups of flour, 1/2 cup of sugar, 1 teaspoon of salt and 1-1/2 teaspoons of baking powder waiting for me to find a recipe that calls for that mixture – suggestions are welcome.

I thought of calling my husband and asking him to pick up more flour on his way home, but rejected that thought rather quickly. I knew what would happen. He would go to the store and be totally befuddled by the variety of flours available. While his brilliant mind leaps nimbly from physics to economics, six competing brands of high-gluten vs. whole wheat vs. white flour would be too much to handle. Not only that, but his basic principle in grocery shopping is that the more expensive the better the quality. My instincts are to buy only things that are on sale. We are financially solvent because I do 98% of our food shopping. While our budget could probably stand an expensive bag of flour, I would get less pleasure from the final product knowing how much it cost.

No problem. As long as I didn’t spill any flour, I had enough to eke out another four cups, with about half a cup to spare. I started over. At which point, problem number two made an appearance. The dough was way too sticky to be rolled out and cut into the proper shape. That half cup of extra flour was definitely needed and even with it, the dough kept on sticking to my rolling pin. I persevered, cutting out circles and attempting to transfer them to a baking sheet to be filled and pressed into a triangular shape. Some cut-outs withstood the transfer, while others fell apart. Eventually, I stopped cutting out rounds and just put a circle of dough on the parchment paper, patting it down to make a circle once it was in place. Why I didn’t do that from the start is not apparent to me – I had some vague idea about wanting to do it the way I always had despite it being frustratingly difficult.

On to the filling. A few weeks ago, I tried a new cookie recipe that had a lovely chocolate filling. You won’t be shocked to read that this led to complication number three. Following what I thought were the exact same directions as previously, I ended up with a measuring cup of melted chocolate. While it looked like a great ice cream topping, it fell short as a cookie filling. I added more chocolate to the mixture and eventually deciding that it would harden after baking, I completed my hamantaschen baking.

I am now the proud owner of five dozen hamantaschen ready for distribution. It took four hours, not including the clean up that awaits. Of course, since most of the people I know are also baking hamantaschen, there is going to be a surplus in the neighborhood and no one will really appreciate mine anyway. While the memory of my baking escapade may be fresh enough next year to have me skip making them from scratch, I know that, with God’s gracious gift of health and energy, I will at some point make them again, refuting my husband’s diatribe against tradition. While I completely agree with him regarding religion and politics, tradition reigns in my kitchen. 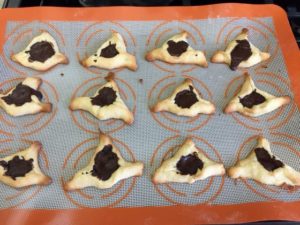 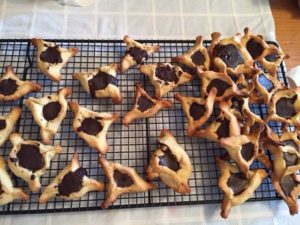