Most of you, like me, have read how conservative speakers are being harassed and shut down on numerous college campuses. Sometimes violence is involved, such as at Berkeley, while other times “only” intimidation and disruption take place.

Not surprisingly, when a society rewards bad behavior, we get more of it. Since the protesters have not been arrested and/or expelled following these events, suppression of conservative speech is increasing.

My husband and I got our personal taste of this at  Cañada College in San Mateo, CA, this past Tuesday night. He was invited by students to give a speech about the morality of business and we soon found that the following notice, revealing the facility of language and depth of discourse one expects from college students, was circulating on campus. 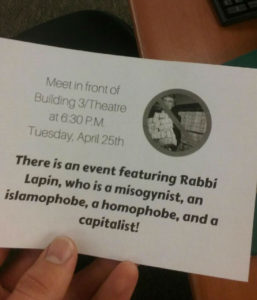 The students who had invited us assured us that security measures were being taken and that a large turnout was expected, though they were expecting some protestors.

We arrived and while my husband was taken to a back room, I circulated among arriving students and community members.  As people entered the auditorium a few girls stood quietly by the stairs leading to the venue, holding signs of protest. I thought that was a perfectly civilized way to express opposition, no matter how misguided. 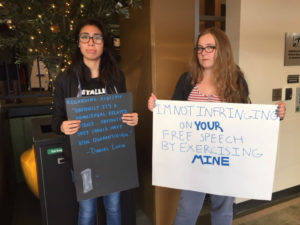 One of the girls actually had a number of different sign with quotes from my husband and I was impressed with the effort she had made rather than using generic material. We got into an interesting conversation when I began to question what exactly she found offensive about the specific quotes she was parading. For example, one of the quotes spoke of women being born with a limited number of eggs while men’s sperm doesn’t share that limitation. I asked if she felt the biological fact was incorrect, which she didn’t, though she thought that suggesting that this might make women and men act differently was wrong. Let’s face it. This is a young student —seventeen? nineteen?—with limited life experience who has, sadly, fallen for the lies being fed to our youth. She hasn’t, as my husband and I have, sat with thirty-five year old women in tears asking why no one told them when they were younger that they might desperately yearn to have a baby one day. She was open to a discussion of her various signs and I actually felt sorry for her. How can you expect a student to defend her ideas when she has been taught what to think rather than how to think while being shielded from different views ?

Still, if this was the extent of the protests, there would be no problem. The speech began and while a few seated young girls (this was a different group than the ones who had been outside) held up signs, including vulgar ones, everything was going along fine. That changed when about half an hour into the speech these girls stood up and began repetitively chanting about eight or so words. I don’t remember the slogan, but it had something to do with Fascism. Their actions suggested that they favor that philosophy though I think their words suggested otherwise. With the rampant historical ignorance among college students, it’s likely they have no idea what Fascism is, since forcible suppression of opposition is one of its mainstays. 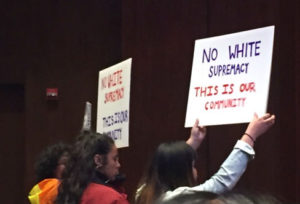 As these three girls continued to stand and shout, my husband asked one of them what she wanted. She ‘asked’ a question about health care and he said that he would be happy to answer it within his talk so could they please sit down and stop disrupting so he could continue. That clearly wasn’t part of their agenda so they continues standing and repetitively shrieking their mantra. At this point a few more girls came in the other side of the auditorium and joined in the screeching. Security stood to the side with folded arms. End of speech.

The rest of the audience was understandably annoyed at being held hostage. There was an attempt to outshout the protesters and a number of people approached the girls pleading with them to leave. Meanwhile, security stood to the side with folded arms. When the event organizers questioned why they didn’t do anything, the response was that they were there so that if things turned violent they could shut the event down. Eventually, after quite a few people had given up and left in frustration, some almost in tears, the organizers circulated word that participants should stealthily leave and take circuitous routes to get to a different room where my husband would give his speech. That is what happened.

Cañada College, like most institutions of learning, has a student code of conduct. Here are two excerpts:

“Students enrolled at Cañada College are expected to conduct themselves as responsible citizens and in a manner compatible with the functioning of an educational institution.”

“Any student [not behaving according to the code] may be subject to disciplinary action, including suspension and/or expulsion.”

To give the bullying students credit, they did not wear masks as violent protesters at Berkeley have done. Masks both increases the intimidation factor and represents cowardice, just as they historically did for the Ku Klux Klan. The professors and other students at Tuesday’s event have identified the irresponsible citizens who acted in a manner incompatible with the functioning of an educational institution. Many of these fellow students were in shock that people whom they considered friends could behave so reprehensibly. I believe that complaints are being filed, though I admit that I would be shocked to hear that serious disciplinary action is taken. The protests here have been empowered by other, larger and better known, colleges that have chosen to side with suppression of free speech and thuggish behavior.

I know how my husband and I felt Tuesday night. I can only imagine how it feels to be a conservative student on campus, being intimidated, insulted and silenced daily. These brave students, many of whom affiliate with YAF (Young America’s Foundation), the organization that helped arrange for my husband’s speech, need and fully deserve our support.

If you have something you wish to politely say to the college’s administration, here is some contact information.