The Royals and Me

Initially, I didn’t think that Harry and Meghan’s choices had much to do with me. Yes, like many other people, articles about England’s royal family catch my attention, but I don’t particularly seek them out. My limited interest in TV means that I’m not sure if Meghan Markle’s show Suits was about a) a law firm b) a fashion house or c) neither of the above. I had not heard of her until she got engaged to a prince and I have too much going on in my own life to spend even a few minutes obsessing about hers. However, I have been rethinking my initial reaction.

I have to admit that as soon as the ex-HRH (his/her royal highness) couple began showing up on the Saanich Peninsula, just north of Victoria on Vancouver Island in British Columbia, I started paying closer attention. That is my family’s “happy place” where we have spent many wonderful summers, and we really don’t want it to get a lot of attention. But that wasn’t what made me change my mind.

An article contrasting Kate Middleton’s and Meghan Markle’s adjustment to life as a royal set me thinking. While neither grew up in the palace, Kate accepted her chosen life circumstances and has been graciously enhancing the monarchy while Meghan has taken a  different direction. Perhaps, the contrast between them isn’t as disassociated from my life as I first thought it was.

Like all of you, I am the daughter of a king—or to be more exact, the King. Sometimes, that can feel restrictive. He has definite ideas about how I should behave in all areas of my life. While He has no paparazzi aiming to catch me unaware, all my actions are recorded on a Heavenly Hard Drive and may be accessed in the future. As His child, my words and deeds reflect upon Him. That’s a rather heavy load to carry.

Of course, there is another side to the story. The relationship comes with big perks. Choosing to live under His wing has blessed me in numerous ways, including most importantly, in my family life. While I have missed out on certain things in order to participate in His preferred engagements such as the Shabbat and Biblical Festivals,  the payback for doing so has provided immense compensation. Being part of a chain that reaches back through time provides a sense of security and belonging.

Still, I have a feeling that I don’t always accept my position with a full complement of grace and gratitude. Part of me sometimes chafes at not being free to call my own shots. Do all the small details including how I dress or how I spend my free time always need to fit into a bigger picture?

To be accurate, my situation parallels Harry more than his wife. I was born into a family that took Judaism seriously. Though I know many who have heroically adopted observances such as keeping the kosher dietary rules, prayer and the Shabbat, as well as the laws governing interpersonal behavior, I personally was brought up in that path. My choice was to embrace the role and seek fulfillment in it or, alternatively, to opt out.

The comparison only goes so far. In searching for a life-mate to marry, my starting point was someone who walked the same road. I wasn’t looking to influence someone to join my lifestyle but seeking someone who had already made that commitment on his own. While the number of potential suitors wasn’t enormous, it was certainly larger than the number of born-and-bred royals out there. There is also no concept in my world for  “an heir and a spare.”

Nonetheless, we are meant to learn from everyone and everything that crosses our path, and that must include prominent people such as Queen Elizabeth and her descendants. All of us are born into certain families and circumstances. We are born into the circle of those for whom a faith-connection is primary or are surrounded by those for whom faith is a minimal or negative association. Sometimes, sadly, we end up with an aversion to God based on the imperfect humans who represent Him to us.

In the final analysis, we do have choices to make. Seventy or so years ago, there is no doubt that most of the British public felt hostility towards King Edward VIII for walking away from the throne. (Of course, it was a gift of God that he did so considering his Nazi sympathies.) Today, attitudes are more evenly split on the question of applauding or denouncing the Sussexes. Much of that reflects changing views about responsibility and obligation. Yet, rather than being a topic for twittering gossip, the actions of this young couple can actually initiate reflection with which we can examine —and improve—our own lives.   And meanwhile, if they left British Columbia for some big metropolitan area, this princess would applaud.

Aren’t we all trying to follow His path?
This includes our political and voting choices.
Share your views, questions and thoughts with us in our
America’s Real War Master Class.
(early (discounted) registration ends after Shabbat 2/1 ET) 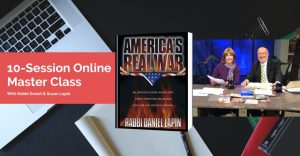