“No questions are out of bounds,” I explained to the awkward-looking young man who approached me.  “Nothing in the entire spectrum of human experience falls outside the purview of ancient Jewish wisdom or beyond the Torah upon which it is based.  Go ahead and tell me what is worrying you,” I assured him.

He shifted uncomfortably from one foot to the other and with his face betraying inner embarrassment, he finally blurted out his question.  “Why did God create men to both urinate and reproduce through the same bodily orifice whereas with women it’s different?”  I had to stop myself from smiling.  Having finally got this conundrum off his chest, he looked like he couldn’t decide whether to feel relief or a desire to flee.

“That is a wonderful question and a very important one,” I told him.  At this point, all panic vanished from his face.  I then told him the answer and added that I would be writing about it in a future Thought Tool for everyone else who had thought of the question but lacked his courage to ask it.  Trent, this one is for you!

Obviously this reflects a significant difference between God’s vision for men and His vision for women.  Knowing that God created visible physical aspects to our bodies that reflect our deepest spiritual realities assures us that our search for truth will bear fruit.  A good place to start our quest is early in Genesis where we can examine the differences between how God created man and how He created woman.

Before we determine who the “us” is, let’s see another crucial distinction between the creation of man and woman.  Man was created from the very lowest substance, the dust of the earth, while woman was created from a far higher ingredient, the body of man.

And the Lord God formed the man out of dust from the ground, and He breathed into his nostrils the soul of life…
(Genesis 2:7)

And the Lord God built the side that He had taken from man into a woman, and He brought her to the man.
(Genesis 2:22)

Though man was created from a lowly ingredient, he was also given the soul of life directly from God.

We’re now able to grasp ancient Jewish wisdom’s explanation of the ‘us’.  There is a plurality in man’s creation alluded to by God’s use of plural language.  God is explaining that man is to be a composite of the very highest and the very lowest—the dust of the earth and the directly God-given soul of life.

From that day to this, men are generally capable of sinking to far lower depths than women.  Conversely, they are also capable of rising to loftier heights.  One area in which this timeless truth finds physical expression is in size differences between men and women.  Remembering that details of our bodies reflect details of our souls, it is relevant that men’s bodies run a wider range of size than women.  For instance, women’s hat shops need stock only a few sizes.  Men’s hatters, of which I patronize a few, need to stock an enormous range from 6 ¾ all the way to 8 in about eleven steps.  Women’s hat sizes, however, never range more than five steps. Most women’s hat stores keep one-size-fits-all, a strategy that could never work for men.

The same pattern is revealed in there being many very short men and also large numbers of very tall men.  Again, the range is wide.  Most women cluster around the mean, right there in the average zone while men occupy the outlier positions of very short and very tall.  Very tall for women is in the range 5’10”—6’ like tennis stars Serena and Venus Williams or First Lady Michelle Obama.  Very tall for men is 6’ 6” or more, like basketball star LeBron James.

While far more controversial than height size, objectively measured raw intelligence as revealed by standardized tests such as the Wechsler Scale or the Standford-Binet repeatedly confirm that women’s IQ tends to be closer to the mean than men’s.  Among the least intelligent Americans, you will find a majority of men.  However the same is true at the other end of the spectrum.  Among super-high-IQ individuals, there will also be more men than women.  Many people whose guiding philosophical principle is ‘equality’ reject these findings as sexist and automatically label these tests as invalid.  This makes as much sense as invalidating any test that reveals the true statistic that there are many more than ten times the number of blacks playing for the National Football League than Jews.

Finally, the same is true on the virtue/vice scale.  Men commit by far the majority of brutal, violent crime.  Though I know this is a controversial claim to make, I think I can prove that men are also more likely than women to do grand acts of self-sacrifice.  Several countries that allow women in combat have discovered the inconvenient truth that men are more likely to sacrifice their lives in combat in order to save their comrades.  Women’s self-sacrifice tends to the particular—bearing and raising the next generation.

The answer to the question which young Trent asked me is that the male organ, the essence of masculinity, in itself discloses the dual essence of men.  We’re capable of enormous goodness and greatness. Goodness way off the far side of the scale.  However, at the opposite extreme, we are also capable of wasting our lives, represented by the excretion of waste-water.  This choice is represented by the capacity to reproduce and eliminate from the same orifice. In general, fewer women are willing to jeopardize all that makes life joyfully tranquil by seizing dreams and accepting the risks necessary for extreme achievement.  Similarly, far fewer women than men waste their lives destroying others and themselves.

Understanding this God-designed difference between the sexes helps women penetrate the souls of men, and comprehend the strange compulsions that drive them.  And for men, it is vital to realize that our drive to extremes (think sports, ambition, sensuality, etc.) can both elevate us and also slam us down into the very pit of irretrievable hopelessness.  Forewarned is forearmed.

We hope that one positive result of the current isolation we’re all experiencing is an increased appreciation for marriage and family. Along with that, comes a recognition of how important it is for the relationship between men and women to be properly sculpted from the first meeting to the 50th wedding anniversary and beyond. Our Lasting Love Set covers all those bases, both on a practical level and including a Bible study of those first few chapters in Genesis that form the basis for an understanding of God’s intentions for successful male-female bonding. The set and its component parts are on sale right now.  Experiencing these resources together with your ‘significant other’ is in itself a bonding activity.  What better use of extra time at home than improving our understanding of this most basic of human needs and the source of much of our joy? 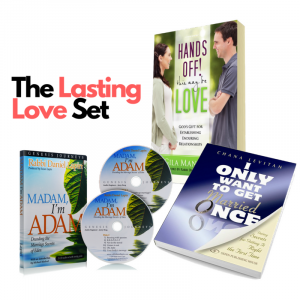