Taking a Back Seat While Others Man the Front Lines

Some of you may have caught the front-page story in the Wall Street Journal  highlighting how overwhelmed New York City hospitals are. The prime example used to illustrate the dysfunction, disorder and dangerous staff conditions was Montefiore Hospital in the Bronx. That is the hospital at which our daughter first worked.

After graduating from nursing school, Lapinette #5  began her nursing career on the medical/surgical wards. After a few years, she moved to the ICU (intensive care unit). Two years ago, she went back to school to get an advanced doctoral degree as a nurse anesthetist. While her training requires clinical rotations in hospitals around the city along with classroom study, those rotations have been canceled due to COVID-19.

Her nursing license is current, the skills she painstakingly acquired during her years in the ICU are somewhat rusty but, like riding a bicycle, she could probably quickly get up to speed. Mayor de Blasio has written to her as well as to every other non-working nurse and she is getting phone calls from City Hall, pleading with her to go back to work.

Our daughter is hearing firsthand from her former co-workers about exactly what the newspaper article described. There is not enough protective gear to make even a pretense of keeping nurses and doctors safe from exposure to the virus. The physical and emotional toll on the staff is devastating

Our daughter, the mother of two young boys, is torn. She and her family have most likely had the virus. Her son’s preschool teacher tested positive and seven days later our children and grandchildren began running fevers and feeling achy. Seven days after that, her amazing babysitter tested positive and both our daughter and son-in-law lost their sense of taste and smell, indicative of the COVID-19. Thank God, their cases were mild and they recuperated at home. They did not meet eligibility for testing, so, like thousands of other people, their cases have not been officially confirmed.

Now she faces a dilemma. She has been trying to get tested to verify that she has developed antibodies to the disease. (An example of the disarray is that while the city is frantically trying to find more medical workers, antibody tests are not easily available.) If that is the case, she is feeling a strong tug to head back to the ICU. That pull comes from two places. One is connected to the reason she went into nursing in the first place, a strong desire to help people. I think the other pull may even be stronger. Akin to how soldiers in a unit bond together and support each other, she wants to provide relief to her ex-co-workers who are in the trenches.

As her mother, I am proud of her desire to contribute. My husband and I raised her to be a giver rather than a taker and she is living the teachings she absorbed. But, as her mother, I desperately want to protect her and our grandchildren. I am censoring myself not to plead with her to stay home and I admit to being grateful that she wasn’t on active duty when this plague broke out. Even some of her fellow nurses are telling her not to come back—lack of safety precautions for them is even worse than we are reading. America is failing to take care of those who take care of us.

Despite being strongly patriotic, none of our children enlisted in the U.S. military. There were good and valid reasons for their not having taken that path. Nevertheless, while we have always supported and appreciated our troops—even before 9-11—we haven’t laid awake at night worrying about our own child in a war zone. Now, with a son on the medical front line and a daughter considering stepping in, we are left praying for their safety and that of their comrades as we move into the back seat and respect their convictions and their need to make their own momentous decisions.

Would you like a seat at Rabbi Daniel Lapin’s Seder?
This year, it looks like it will be Seder for two.
But, you can get probe with him beneath the surface of the words and rituals to find a roadmap to renewal.
How to Lead Your Own Passover Seder
3 Volumes available individually or as a set 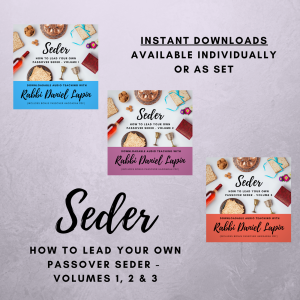 Every Doctor Needs a Mama Bear

I have never been a helicopter mom. I don’t think my children are perfect (though they come pretty close). When they fought with friends, I didn’t assume that they were automatically innocent victims. My children learned how to cook, do the laundry and clean up after themselves at a young age. I have never called a teacher to protest a grade, nor have I written school papers for my kids. I have certainly never shown up at a job interview with one of them, at least past the age of ten.

But there’s a time when enough is enough and this mama bear is ready to go on the warpath. You see, to the utter amazement of my husband and myself, two of our children are in the medical field. Our son is an emergency room physician and our daughter, after a number of years of nursing on a general ward and in the Intensive Care Unit, is now on her way to becoming a nurse anesthetist.

This has given us a bit of an inside view into the medical profession. We have watched our children and their peers work 12 hour shifts and more. We have seen them heartbroken by patients’ deaths. We have sensed their frustration at giving their all to save a patient who they know will be back in the hospital soon after release because she won’t change her self-destructive behavior. We have watched in awe as these doctors and nurses pushed themselves beyond human limits to help those in need. We cheered as they got  jobs with good salaries that let them start paying back the exorbitant amount of debt they accumulated while training.

END_OF_DOCUMENT_TOKEN_TO_BE_REPLACED

Reacting to the Morgue

This year I became a med student. Therefore, with anatomy lessons I go to the morgue. It’s a great way to learn, however, I can’t help but feel rather uncomfortable.

That got me thinking – Is it an appropriate way to learn?

First of all, congratulations on getting into medical school. That is quite an accomplishment.

As you go through school and residency and embark on a medical career, you are going to be called upon to do many things that will make you uncomfortable. Not only will you dissect cadavers but, among other things, you will be cutting into living people and be exposed to intimate and hidden parts of people’s bodies. You will be surrounded by people in deep emotional trauma. You will sometimes make mistakes that have the most serious consequences as well as blessedly do just the right thing at the right time with amazing results.

In order to be effective, it can be helpful to remember that you are in the process of fulfilling your God-given mission to heal.  “…I am the Lord your Healer” (Exodus 15:26)  Just as He heals us, so should we emulate Him and also become healers.  You know that you will need to learn to act professionally and overcome your feelings. That doesn’t mean to cauterize your feelings but it means to control them.  The danger is that you can do that so well that you end up slightly  dehumanizing  yourself in order to do what needs to be done.