Why do people say “Bless you!” to a sneezer? Well, you see, in olden times they believed…Why do so many believe that walking under a ladder brings back luck?  You see, about 5,000 years ago, Egyptians thought…What is the ‘evil eye’? It was something feared by the ancients… See the subtext here?  Dismiss something as ‘from yesterday’ and you condemn it to irrelevancy.  Only today and tomorrow count; yesterday is probably only a superstition.

What is the significance of the Star of David? Well, it was found on a 3rd-century Jewish tombstone…It is discussed in medieval Kabbalah texts…In the early 1600s, it appeared on a flag flying over a Czechoslovakian synagogue.

Does it really have no contemporary significance?  Is it just a six-pointed star that ignorant people used to draw that Jews later adopted as a symbol?

6 is the first of what are called “perfect numbers”.  All the numbers that can be exactly divided into 6 also add up to 6.  (1 + 2 + 3 = 6)  The second perfect number is 28 and the third is 496. More importantly, it is the number of directions at which we can look at our world. Imagine yourself embedded in the middle of a lucite cube. You can look out of its six faces: forwards (north), left (west), rear (south), right (east), up and down.

Most importantly, “For in six days the Lord made heaven and earth and sea, and all that is in them…” (Exodus 20:11).  But the Star of David, known in Hebrew as the Shield of David is not just a six-pointed star.  It is one triangle superimposed on another. It is actually two triangles, one of which is rotated half a circle (180 degrees) and then superimposed upon the other.

That is important because a triangle is the most reliable engineering shape. For this reason, the truss bridge, which is the most common kind of bridge,  is made up of nothing but triangles. 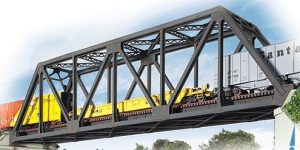 There is no stronger arrangement into which you can shape 3 lines than by making them into a triangle.  If I had to give written instructions for constructing one, I’d say connect one end of line A to one end of line B, and then the other end of line B to an end of C.  Now join the other end of C to A.  Connected this way, the resulting triangular structure cannot wiggle or move. It is perfectly stable and strong. Two triangles superimposed on each other will look like the final drawing in this series: 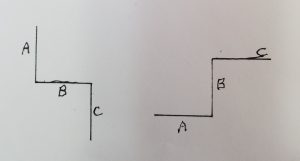 Now, let’s take two of these shapes, rotate one of them half a circle and then superimpose it upon the first.  Look what we obtain: 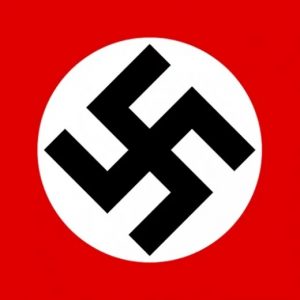 Thus we see that both the triangle and the basic element of the swastika comprise three lines, A, B & C.  What do the three lines represent?

A: God.
B: The physical world which He created and into which He placed us.
C: People.

In the triangle, each line is linked to the other two in an inseparable matrix of might. The triangle is asserting that if we remain connected and bonded with God, other humans, and our physical world, we are firmly planted in a dependable reality.

By contrast, the swastika’s basic element also contains three lines, however,  were you to push on the ends, the structure would wiggle, shake, and deform. Here we see the intrinsic fragility of a worldview in which we humans are not linked both to our Creator and to His world in a very practical way.

You might be wondering why two triangles are needed.  Why couldn’t the symbol of the Jewish covenant just be one triangle? The answer is that each of the three lines represents something that must be considered from two perspectives.

Those are the six faces of that lucite cube from which we contemplate reality and struggle to understand it.  The Star of David graphically represents that with geometric precision, while its mirror image, the swastika, represents failing dismally at that task.

15 thoughts on “Stars and Superstitions”