While boating in British Columbia, I resemble nothing so much as Carol Burnett’s rendition of a charwoman. If I visited Victoria, Vancouver or dozens of smaller cities via airplane or car, I would dress as I usually do. Arriving by small boat, I tend to personify the essence of casual verging on bohemian. The change in clothing exemplifies the change in pace and preoccupation.

My appearance is in utter contrast to the magnificent scenery. Each year, as our months away from the Northwest accumulate, my husband and I start thinking that surely our imaginations are exaggerating the beauty. Then summer arrives, we go back and know that we actually had forgotten just how magnificent it is. By the time we are there for a few days we, whose vocabulary is pretty  extensive, run out of descriptive words. 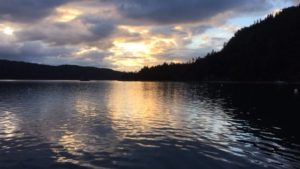 Friends of ours sometimes question our return to the same area each summer that we are blessed to be able to do so. Don’t we want to see Europe, Africa, Scandinavia, New England or other fascinating places close and far away? Not really; we prefer to follow the pattern of migratory butterflies, yearning to retrace our steps rather than charting new courses. 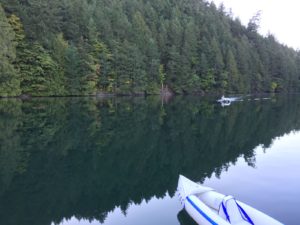 We intellectually know that people living in Mill Bay, Brentwood Bay, Pender Harbour and other of our favorite haunts worry about their health and finances. We are aware that they are sometimes disappointed in their government and nervous about world affairs. Nonetheless, when we navigate our little ship from one cove to another stopping at various anchorages and docks, we focus on currents and wind, on the water level in our fresh-water tanks and what local produce we can pick up for supper, taking a life-infusing break from more weighty concerns. For two tone-deaf individuals, we are surprisingly prone to breaking out in song, overwhelmed by gratitude to God for creating such exquisiteness. 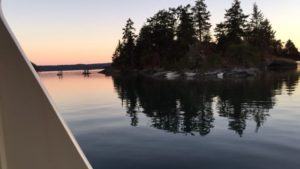 We returned home this past Friday, reinvigorated and refreshed. Prince William and his wife Kate arrived in Victoria BC a few days after we sailed away, perfectly dressed and coiffed. I had to smile at the contrast.