When I was a teenager, my parents sent me to study Torah in Israel with my great-uncle, Rabbi Elya Lopian.  Watching and listening to a man who was a giant of ancient Jewish wisdom opened my eyes to spiritual reality.

Large numbers of young men from around the world flocked to study with him at his yeshiva, Knesset Hezekiah. A student, on one occasion, sought permission from my great-uncle to miss yeshiva while he returned home for a family wedding. Reb Elya inquired whether there would be young women dressed immodestly at the wedding.  My friend responded honestly that there was every possibility of this. However, he assured our teacher that his spiritual level was so high that he would be immune to whatever exposed feminine charms he might encounter.  He barely noticed attractive women, he concluded.

Reb Elya granted his student permission to attend the wedding on condition that before he left, he was to meet with a friend of Reb Elya’s. When the young man came to bid farewell, my uncle asked him about his appointment. The student answered,

“Well, I did call the number you gave me but it must have been a mistake since it was a doctor’s office!”

Replied Reb Elya, “There was no mistake.  I am nearly eighty years old and blind in one eye, yet I am powerfully affected by the sight of women in scanty dress.  Since you, a healthy young man, assure me that you are not, I know you must be suffering from a medical condition. I wanted you to be examined by the doctor whose name I gave you.”

The lesson I learned from this event is always to be profoundly aware that we humans are impacted by everything we do and by everyone we encounter.  In many circumstances the effect might be subconscious but for better or for worse, each day’s events change us.

The Divine directive to safeguard ourselves is quite clear:

Straightforward, isn’t it?  But there’s one problem.  In Hebrew, the Lord’s language, verbs indicate gender. Actions must match the gender of whatever is being acted upon. The verbs ‘to work’ and ‘to preserve’ in this verse indicate female gender.  So the sentence actually reads, “…and placed him in the garden to work her and preserve her.”  Yet the Hebrew word for garden, GaN, is a masculine word.

We find the answer back in verse 7—Adam’s soul, NeFeSH ChaYaH—a feminine word.  God gave not only Adam, but all of us a perfect soul and He expects us to work on it and preserve it. Every movie we watch, everything we do and say, and everyone we spend time with  impacts our soul.

At this point, if you’re like me, you are throwing your hands up in despair. Perhaps the only way to preserve my soul’s purity is to hide in an isolated cave! Not so fast. In verse 17 God makes clear that opting out of the world isn’t an option.

Reb Elya understood that being at a family wedding was important, even if less religious relatives might be dressed provocatively. Refusing to acknowledge the challenge involved, however, would make one less likely to deal well with it.

We can all plan to maximize positive experiences and minimize the effects of negative ones. Americans have just been through an election cycle that had more than its share of degrading moments. It highlighted how coarse our culture has become and how easily we become accustomed to lowered standards. This is a bipartisan problem and we would be foolish to think it doesn’t impact us. Like Adam, we need to guard our souls. We would like to offer our Biblical Blueprint Set of five audio CDs to help in that battle. It will delight and challenge you to deal correctly with everyday influences. It is on sale now, making it a fine time to access this ancient Jewish wisdom 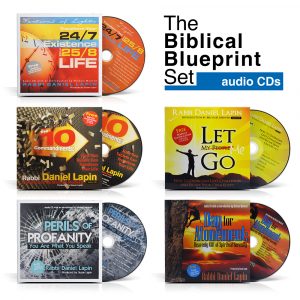 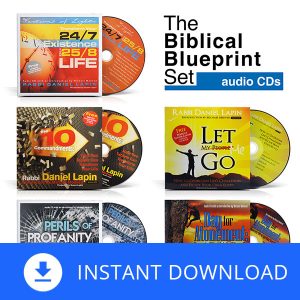