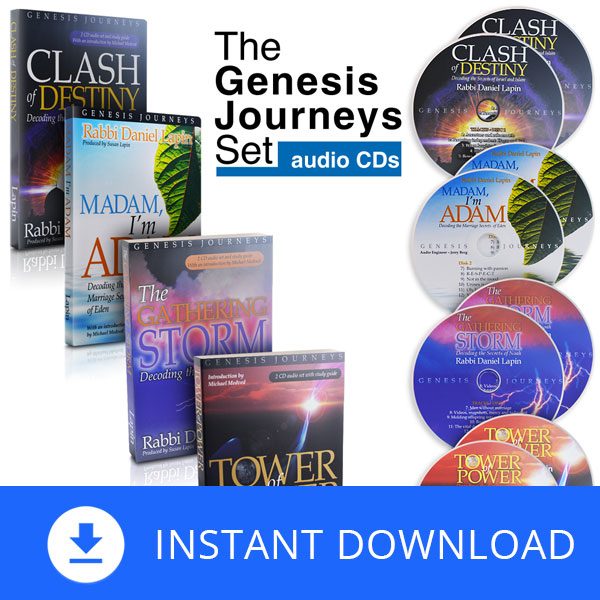 Includes all 4 CD teachings – 8 CDs in all – from the Genesis Journeys Series!

Take advantage of this opportunity to SAVE by purchasing all 4 teachings from Rabbi Daniel Lapin’s Genesis Journeys series at one time.

Why are are there two different tales of Creation at the beginning of Genesis? What led to the Flood – and to Noah’s family being saved? Who was Abraham’s arch-enemy and is he the father of socialism? Who was Ishmael and are today’s Moslems really his heirs? If Adam and Eve gave marriage advice, what would they say?

Answer these questions and so many more with the Genesis Journeys Set. You will listen again and again and want to share these with family and friends.

Majestic and mysterious, loved and cherished, the Bible has been examined and studied for millennia. No other volume has impacted human life more or provided greater guidance and inspiration.

Whether it was America’s own founding fathers like James Madison and George Washington, great scientists such as Sir Isaac Newton or Samuel Morse or our own family’s ancestors, wise people have pored over this valuable gem.

Today, many still cherish the Bible and study it faithfully. But most people today, whether Jewish or Christian, are lacking vital learning tools that were available to earlier generations. You can look at Jewish texts that have been handed down for centuries from teacher to student or at the time-honored Ainsworth Bible used in America’s colonial churches, and you will become aware of the special role that Hebrew played in helping earlier generations to understand the Bible.

Similarly, ancient wisdom that was originally conveyed from God to Moses, from Moses to Joshua and lovingly transmitted orally from parent to child in Jewish households, has fallen prey to our modern impulse to cast away anything old without recognizing its value.

There are no reviews yet.