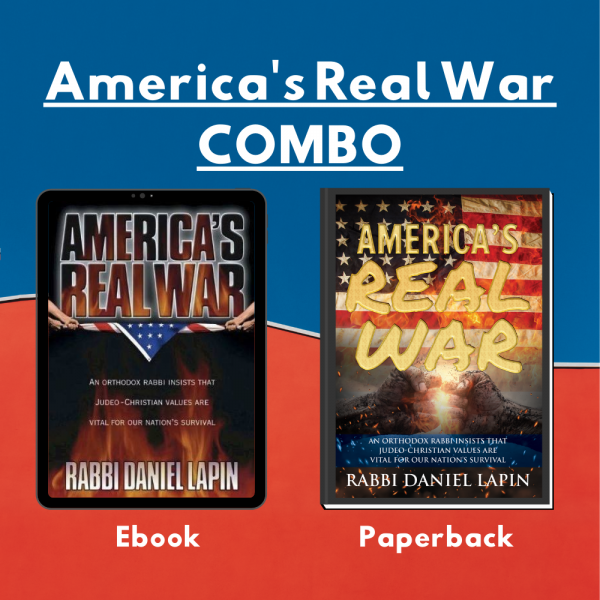 In 1999 our book, America’s Real War, explained why, as committed Jews, we fight to preserve America’s Christian heritage.

Now available for the first time in ebook and again in print, this award-winning book, which has been out of print for many years, is as important and relevant today as it was when it was written.

When you purchase this combo (both the ebook and paperback) you will receive the ebook downloads via email and the paperback will be shipped upon its release in November 2020.*

The initial response to America’s Real War when it was originally published in 1999 was overwhelming. It had huge sales, was first runner-up in the Christian book awards, and was responsible for launching a long-needed but unprecedented alliance between Jews and Christians.

America’s Real War argues that the real chasm in American culture is not between blacks and whites, rich and poor, men and women, or Jews and Christians.

The book also proves that no gap exists between social conservatism and economic conservatism, and why economic success usually accompanies countries and societies following a more culturally conservative direction.

Most importantly, the book persuasively answers perhaps the most frequently asked question posed by millions of Americans curious about their Jewish fellow-citizens: Why is such a disproportionately large percentage of American Jews more committed to the secular liberal values of today’s Democrat Party than to the God of Abraham, Isaac, and Jacob?

America’s Real War has been out-of-print for six years. As we head into a presidential election, the enemies of traditional values, and indeed of religious Jews and Christians, are out in full force. Many readers of America’s Real War thanked us for giving practical, rational, and easy-to-follow arguments to support their positions. The book helped them analyze politicians’ words and see the underlying reality. It allowed them to see and share ideas with their children, extended family and friends. The book laid bare the anti-Godly agendas that are often masked by seemingly innocent language.

Since we wrote this book, a great deal has happened. The book predated 9/11, the increasing anti-Biblical bias of the country’s elite, and the mainstreaming of the radical Leftist agenda that is laid bare today. Issues such as Islamic terrorism, gender-fluidity, violence against conservatives on university campuses and so much more deserve to be added and analyzed. However, the original principles in this book are still true today and after receiving so many requests for America’s Real War,  we are making the original text available once again.

There are no reviews yet.