In the car one day this week, one of my daughters told me a story that resonates with a lesson we learn from Numbers 13. Last summer she had been in day camp for a few weeks, and one day she had been on a bus with the camp going to some fun destination.  She thought it was funny that in the parking lot the girls all began filing off the bus silently or talking to each other, but not thanking the bus driver.  When she got to the front of the bus, she said thank you to the driver and then heard the girl behind her say thank you and the one behind her and the one behind her until the bus driver didn’t stop repeating “You’re welcome” over and over.

What does this have to do with the twelve spies sent to see the land of Canaan?

Ancient Jewish wisdom tells us that when Moses sent the men to spy out the land of Israel he prayed for Joshua, “May God save you from the advice of the spies.”  Moses saw his primary student Joshua had learned from Moses’s outstanding quality of humility and was himself a most modest and humble person.  The problem Moses recognized was that sometimes modesty and humility can lead a person to stay quiet about his own views, instead adopting the majority viewpoint of those around him.

Joshua’s humility and modesty put him at risk of  ceding to the majority opinion of the spies instead of holding fast to his own views, and so Moses prayed that God should give Joshua strength to resist the viewpoint of the majority. 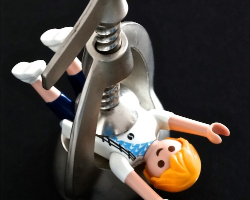 Even without Joshua’s humility, we, and especially children, can be easily swayed by peer pressure or the behavior of the majority of those around us.  The girls on the first half of the bus weren’t intending to be rude or inconsiderate. Each one was simply doing what the girl ahead of her did, following her peer as she silently walked out of the bus.  The girls in the back half of the bus were fortunate that each one heard the girl ahead of her thank the bus driver. They too were affected by those around them and followed their peers in thanking the driver.  I believe this is a lesson for us to be aware of and to teach to our children.

When we are in groups of people it is very easy to just do what everyone around us is doing instead of stepping out of line to do what is right.  The pressure of the majority is real and often leads to a lowered standard of behavior.  Have you ever noticed that kids in groups tend to behave differently than any one of those children would alone?  I see it all the time and I discuss it with my kids.  I want them to be on guard that even when they are among friends, they should be careful to do what they know to be right and best, regardless of what the norm is in the group.  This is a powerful lesson.  Even Joshua, the great student of Moses, needed Divine help to stand apart from majority opinion.  Surely, we can learn from this to talk to our children about the subtle realities of peer pressure and maintaining their individual sense of right and wrong even when in groups.

What is this page?