Boating without a chart and a compass is quite unthinkable.  Even on land, maps help me make sense of otherwise confusing environments that can feel almost unknowable.  Before the advent of the Global Positioning System, otherwise known as GPS, roadmaps were ubiquitous.  I have heard that (before my time), gas stations used to hand them out for free.  To this day, when I arrive in a new city for the first time I feel uneasy until I have acquired a large-scale street map on which I can locate my surroundings.

A young relative on a road trip recently phoned me from his car.  He was trying to get from one side of a busy city to the other and wanted to know if there was a beltway that encircled the city or whether he had no choice but to drive through the city center as his GPS instructed.  This is a question that could be instantly answered by consulting a map but, not having one, he called me.  He knew that I had a big box of road maps for almost every North American location and that I’d be happy to help him.  I was still astounded that he embarked on a 700-mile journey without a paper map in the car.

Those who are elected, anointed or appointed to run the day-to-day operations of a society are often subjected to extreme pressures.  Those pressures are particularly powerful if that society is closer to a democracy than to a tyranny. In the latter, those applying pressure can ‘be dealt with.’  In a democracy, however, if enough people demand something, even something that will eventually imperil that society, it is very hard for representatives to resist. And without a roadmap, people will sometimes demand things that promise pleasure, satisfaction or even revenge now but will decidedly bring destruction and doom down the road. Without a roadmap, politicians often lack a reason to resist the dangerous populist call and administer wisely rather than merely compliantly.

The study of physics, chemistry, biology, and other authentic sciences helps us feel less alienated from the physical world in which we live.  Things happen for a reason and we don’t need to fall back on mythical monsters and vengeful deities to explain why thunder follows lightning, how microbes help our digestion and why certain elements undergo radioactive decay.

While science is clearly a vital tool in trying to understand how the world REALLY works, it cannot provide information about those things not measurable by scientific method.  It can tell us little about the role honesty and integrity play in the life of a person and a culture.  It provides no reliable data on the sources of profound human happiness and it often provides contradictory information on how to marry successfully and how best to raise the progeny of that marriage.  For these and countless other questions vital to human survival, we have to turn to another system every bit as powerful and just as reliable as the scientific system.

I think of this system as the general theory on the totality of all existence, otherwise known as the Biblical system of knowledge. It makes our world as comprehensible as a roadmap makes a new city and allows us to anchor ourselves to a unifying integrity.

This truth is reflected by the arrangement of the Days of Creation in Genesis 1, each of which concludes with an ordinal number; third day, fourth day, fifth day, etc.  The exception is the first day of Creation. Rather than saying, “And there was evening and there was morning, the first day,” the verse reads:

… there was evening and there was morning day One
Genesis 1:5

In Hebrew, the number one, ECHaD, has no ordinal form. If we need to say first, we use an entirely different word RiSHoN, which literally means, “head of” as in the head of the line.  Each of the subsequent Hebrew numbers follows the ordinal pattern such as fourth or seventh.

The reason that the Lord’s language doesn’t admit an ordinal form of one is that when we use numbers such as sixth or eighth we imply that there are more of whatever we are counting coming along.  However, ancient Jewish wisdom views one as unique by definition.  It always references the singleness of God and the unifying integrity of His creation. There is nothing like it coming down the road to make it only the first (of several).  Since one is associated with God, it is one and only one.

While there are thousands of ways to destroy a skyscraper, a bridge, or a precision watch, there really is only one way to build each of those things, and that is by meticulously following blueprints. Aesthetics and embellishments can differ, but you must adhere to the basic rules of engineering. There are also thousands of ways to destroy the civilization that enables millions to live in peace, to work productively, eat to their fill and obtain medical help when needed. However, there really is only one way to build it and maintain it. That way is detailed in the Manufacturer’s Manual for the Maintenance of Civilization, the book otherwise known as the Bible.  Details of observance can differ, but the basic rules are fixed in stone.

The number one becomes very important when there are not a lot of ways of keeping something alive.  At a time like that nobody wants experimentation, they want the one way that is guaranteed to work.

Step one of that reliable way is that we try to avoid making dramatic and permanent changes in the machinery of society in the very midst of turmoil. When turbulence is roiling what used to be a more serene surface of society, people are emotionally driven; and emotional feelings ignore facts. Just as we must wait for a tsunami to subside before building dikes, so we have to let feelings calm before we see what path we should take. That is true for marriage, child-raising, business, and society.

We present these Thought Tools with the prayer that they help us keep number One in mind. As our Creator, He alone understands us best. Access three years of Thought Tools to sculpt your soul and share with others with our Thought Tool Set. This collection of teachings is on sale now.

SALE
The Thought Tool Set
When times are tough, rely on the basics.
Basic Bible teachings that explain how the world REALLY works. 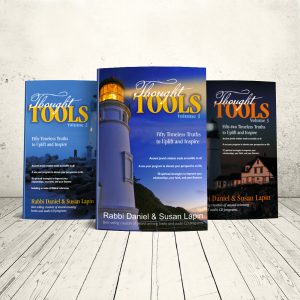 13 thoughts on “Peace or Pandemonium”