This week offers a view into two types of tragedy. Our news is filled with stories of people losing homes, businesses and even their lives due to hurricanes. Sixteen years ago this week, on September 11, 2001, the news was full of stories of many more people losing their lives (the loss of businesses existed but was overshadowed by the magnitude of loss of human life) due to an evil ideology full of hatred.

Scripture pulls no punches in warning us of tragedies that will overwhelm us should we abandon God’s guidance. Many of these are consequences that flow naturally rather than bolts of lightning from Heaven as people focus on the wrong things and stop seeing humanity as created in God’s image.

One section of the Torah, filled with horrifying descriptions of misery, begins with these words:

The following 52 verses describe how badly life deteriorates when God’s blueprint for social organization, as laid out in the rest of the Bible, is ignored. God’s system regulates both our relationship with Him and with other people. When individual property rights are not protected, poverty ensues.  When the legal system fails to treat both wealthy achievers as well as the destitute fairly, social cohesion collapses.  When concupiscent degeneracy displaces family life, vulgarity overwhelms the culture.

As people turn away from a Heaven-centric vision of life, growing numbers become takers rather than makers. Ordinary citizens lose both the will and the ability to defend themselves against natural disaster, internal predators and external enemies. Within only a few generations, once strong, successful and vibrant societies decline to geopolitical insignificance. Their people suffer in anguish never quite understanding what happened.

God will return you to Egypt in ships…and there you will offer yourselves for sale to your enemies as slaves and maids but there will be no buyer.
(Deuteronomy 28:68)

Why would the final consequence of living a life of secular decadence be finding ourselves transported back into Egypt by ships?

The Hebrew word for ship, ANiYaH contains the first person pronoun “I” (In Hebrew-ANi). It always implies a journey of significance, either positive or negative. 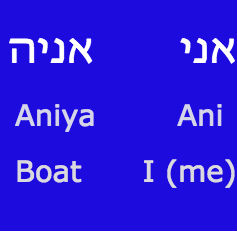 Common figures of speech like “my voyage of discovery” indicate that crossing an ocean is a natural metaphor for a significant journey.  The most significant ocean crossing in Israel’s history was crossing the Red Sea.  They didn’t have to use boats.  God split the ocean enabling them to walk across on dry land.

We now have enough information to understand Deuteronomy 28:68.

General decadence, decline, and decay are all consequences for a society that abandons God’s blueprint.  The final blow is that people lose the joy of being unique creative individuals and see tragedies as inevitable and expected.  As promised, God leads them along the road of their choice.

Scripture’s Egypt is not just a country from which God took the Israelites during the Exodus.  The Hebrew word for Egypt, M-TZ-R-IM also means narrow, confined, and restricted. Sadly, humans who have abandoned their Godly side often crave that very lack of freedom. They willingly relinquish their God-given destiny in exchange for a (false) promise of assured sustenance and safety even though doing so will forever constrain the limitless potential they once enjoyed. 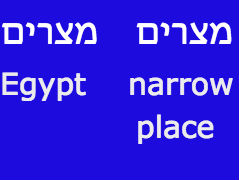 The final blow is discovering that nobody wants them.  Having sunk into self-indulgent depravity, they have so little value that even as slaves they can find no buyers.

23 thoughts on “Of Hurricanes and Hatred”