This has been an unsettling week for me. A number of years ago, my mother’s sister passed away, the last of the five siblings. This month, her children sold my aunt’s house and one of my cousins had the unenviable job of cleaning it out. In the garage she found a few boxes that had been moved there from our grandparents’ apartment over forty years ago when my grandmother died. It became a running joke that each summer my mother, her sister and sisters-in-law would say they were going to sort through things, and as each summer ended, the boxes remained untouched.

Untouched they are no longer. My cousin sent some of the contents to me including postcards exchanged when my grandparents were courting, photos that span decades and a meticulously kept address book. 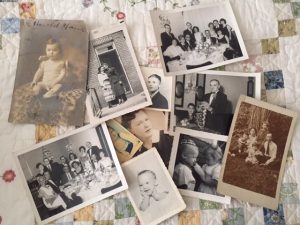 All these things have thrown me for a loop. I was very close to my grandparents; to this day I can instantaneously recall their phone number. My grandmother died shortly after I graduated college and my grandfather a few years later, so they were an important and loving presence through my growing up years. Now, decades later, I am seeing them in ways I never did before.

In my mind’s eye my grandmother, in particular, had one occupation— waiting for me to come visit. I never thought of what she did when I wasn’t with her, unless it was to cook my favorite foods so that they would be on hand when needed.  In fact, I found it irritating that some of my cousins had the ridiculous idea that she loved them as much as she loved me. In the self-absorption of youth (that may have only ended this week) I didn’t really see a need for her to have an identity separate from me.

Both my maternal grandparents came to the United States from Europe before World War I. While my grandfather was escaping the draft of an army that despised Jews, my grandmother told me that she came on a trip and was trapped here by the war. (Surely, I now think, there was a lot more to that story. Religious Jewish girls did not generally cross the ocean by themselves on a lark.) By the time the conflict ended, they were married and building a life in their new country. Neither ever spoke (to me at least) about the families and lives they left behind.

I never thought of what it was like for them to marry without the presence of parents or siblings, or, a few decades later, what it meant to lose almost every family member in the Holocaust. The exception was one brother each that they managed to bring over as Hitler’s evil spread. I knew that I was named for a murdered sister, but only this week have I begun to think of the depth of pain that kept my grandmother from ever talking about the parents and six siblings, their spouses and children, that she never saw again or how my grandfather felt knowing he had left his parents and sister behind.

In those old albums and ancient address book now on my dining room table, I see names and faces I do not know. Who are these people who cared enough to send photos to my grandparents and about whom my grandparents cared enough  to label and preserve their pictures? I have had trouble concentrating this week as I Google names, look up the history of towns whose Jews were overwhelmingly massacred and try to picture a young couple on their own, learning a new language, building a life and maintaining a deep connection with their faith.  They became the grandparents I knew, whose bottomless love for God, for me, for the rest of their family and for the United States was the bedrock of my childhood.

32 thoughts on “Memories and Unanswered Questions”