I get it. I really understand why Ted Cruz doesn’t want to endorse Trump. Donald Trump didn’t simply defeat him; he insulted and demeaned him and his family with crudeness, gutter language and lies.

I understand why other politicians don’t want to endorse Trump. The nominee has given no reason for people to trust him not to make foolish and disgusting remarks. Whether it is an act or reality, his emotional maturity comes across as that of a ten year old. Trump may be able to walk past his words, but those associated with him will find it harder to remove the excrement.

Nonetheless, I don’t respect the Bushes, John Kasich and Ted Cruz  as much as I used to. On a personal level, Trump is reaping what he sowed. If I had a teenager prone to angry outbursts and to giving withering insults, I would use this as an educational moment. Bullying may make you feel powerful in the instance, but it is actually a show of weakness. While you may forget your words, your victims won’t. As my grandfather used to teach me when he addressed everyone from the janitor to his boss with respect and warmth, “You never know the twists and turns life will take and when someone who needs you now will be someone you need in the future.”

However, the Bushes, Kasich and Cruz should not be thinking on a personal level. Not only should they not be nursing hurts from the past two years, they should show that they care more for the country than for their own egos or political futures. If they don’t recognize the threat of a Clinton presidency, they are part of the problem, not part of the solution.

What of the second worry? Will they find themselves tarred with the brush of an embarrassing and even despicable Trump statement? Guess what? The New York Times, CNN and the rest of the leftist media is going to tar them with that brush anyway. The only way they will avoid that fate is by converting to the Democrat Party and bowing obeisance to secular liberalism.

I wish these men instead would have taken a page from the Trump playbook. Trump speaks politically incorrect truths about terrorism, the economy  and illegal immigrants even as President Obama and his devotees condemn Americans who want an honest conversation. This is a great part of Trump’s popularity. Established Republicans did not understand how many Republican voters and conservative-leaning people yearned for a strong response to the past seven years and despised the tepid, lukewarm words of the Romney-McConell wing of the party that was supposed to represent them. The failed Republican candidates should have followed Trump’s lead and spoken honestly. They should have endorsed Donald Trump wholeheartedly as the only alternative to Hillary Clinton,  while sadly acknowledging that his language and manner are often cringeworthy. By staying away they are looking like sore losers as well as missing the chance to acknowledge the pain of the electorate, for which they do hold more than a little responsibility.

Ted Cruz could have spoken at the convention of his conflicted emotions and internal struggle about Donald Trump — giving voice to many of his supporters’ feelings. The he could have explained why he is putting the need to defeat Hillary above everything else. Do everything you can to get Trump elected and then hold Trump’s feet to the fire to ensure that he makes the right Supreme Court picks and surrounds himself with wise, conservative advisors rather than sycophants. Encourage his supporters not to put blinders on, as so many Democrat politicians do when it comes to their extremely flawed nominee, but to realistically face their own flawed candidate. Instead, as my husband put it, Cruz, “ate another man’s food and then vomited on his table.” It would have been classier not to show up.

In 1939, a document known as the White Paper was issued under Neville Chamberlain’s government that severely restricted Jewish immigration to Palestine and reversed previous British promises to the Jewish people. That immigration restriction doomed Jews to death in Europe. At the same time, the British quickly became the leaders in the battle against the Nazis. David Ben-Gurion, head of the Jewish Agency for Palestine, encouraged people to fight the White Paper as if there were no Nazis while fighting the Nazis (by enlisting in and helping the British army) as if there was no White Paper.

Trump is the nominee. It is time to fight Hillary as if there were no flaws in Donald Trump while opposing the vulgarity that Trump exudes and his confused understanding of some issues as if there was no Hillary.

Supporting a family and thriving financially is getting harder.
Take advantage of our book, Business Secrets from the Bible
to invigorate yourself and those you love to meet the challenge in a Godly, positive way. 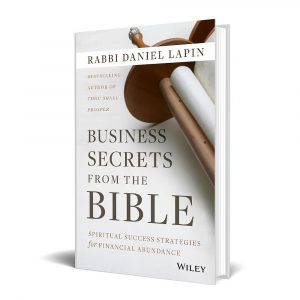 39 thoughts on “Losing Respect for Some Trump Foes”