“Rabbi Lapin, please stop talking and writing about money; all you’re doing is perpetuating anti-Semitic stereotypes!”  This was the phone call I received a while ago from the head of one of the Jewish organizations concerned with anti-Semitism.  Knowing it was futile, I still recommended that he worry more about Moslems than about me.

“Rabbi Lapin, I love your weekly email messages but I get really turned off by the commercial message. I know you have to advertise, but it detracts from the spiritual high you give me.”  This was an email I received from a long-time reader of our work.  I responded by explaining how making money can be as much a way of serving God as worship is. I suggested that her attitude really placed her ‘behind the eight ball’ financially.  Hoping she wouldn’t be too put-off by another advertisement, I recommended she read Thou Shall Prosper for the full explanation

Then I assured her that I would write more on the topic. Here it is.

Compare these two verses and see if you can spot the subtle but significant distinction.

Abram took his wife, Sarai, and Lot, his brother’s son, and all their possessions that they had acquired…
(Genesis 12:5)

Abram went up from Egypt, he and his wife, and all that he possessed—and Lot was with him…
(Genesis 13:1)

Both journeys involved three people: Abraham; his wife Sarah; and his nephew Lot.  Both trips also involve Abraham’s wealth.  The main difference is that on the first journey Lot was wholeheartedly with his relatives, Abraham and Sarah.  By the second journey, the text indicates that Lot was more attracted to the wealth than to his uncle and aunt.  Looking at the arrangements of words in that verse, one could say that the possessions came between Abraham and Lot.

We are not shocked when five verses later we read of growing disagreement between the establishments of Abraham and Lot.

And the land did not bear them to dwell together, for their possessions were many, and they could not dwell together.
(Genesis 13:6)

Before we examine the meaning of the number eight, let’s identify one other phrase that appears eight times in the Abraham account.

And Sarah died in Kiryat Arba…And Abraham arose from before his dead,
and he spoke to the sons of Het…
(Genesis 23:2-3)

And the sons of Het answered Abraham…
(Genesis 23:5)

And Abraham arose and prostrated himself…to the sons of Het…
(Genesis 23:7)

During the account of Abraham’s negotiation with the sons of Het for a burial plot, they are referenced eight times.  It is clearly deliberate since some of the mentions could have been replaced with a pronoun or omitted.

Mentioning sons of Het eight times is interesting because the eighth letter of the Hebrew alphabet is the letter named Het, whose assigned numerical value is, yes, eight.

So, Abraham’s wealth and his largest expenditure are both referenced eight times. Furthermore, he hands over a substantial slice of his assets to people named, “Sons of Eight.”

We need to know what the number eight signifies in Biblical thought.  An important Biblical tool is knowing that the first mention of something in Scripture is a good place to search for that thing’s essential meaning.

And Abraham circumcised his son Isaac when he was eight days old, as God had commanded him.
(Genesis 21:4)

In ancient Jewish wisdom, circumcision represents humans partnering with God to build His world. God created man, but we humans improve man by removing his foreskin.You won’t be surprised that the Hebrew word for oil, SHeMeN, spells out the number eight.  God creates oil, but it is valueless until man extracts its energy by burning it.

Abraham was the first human to accumulate wealth and the first person to invest some of that wealth in real estate.  By being mentioned exactly eight times, both activities hint at a partnership with God. Like so many other important Biblical insights, this is counterintuitive.  Left to our own, we tend to think of making and investing money as somehow unGodly, unBiblical, or at the very least, decidedly unspiritual. In reality, money is one avenue in which we partner with God to improve His world.

This is an appropriate time to discuss the number eight as we approach the holiday of Chanuka – the only festival designated for eight days. The implications of this holiday for our modern lives are mind-boggling and largely revolve around the numbers eight and twenty-five. If you’d like to hear more, listen to our audio CD Festival of Lights: Transform Your 24/7 Existence Into a 25/8 Life. This isn’t ancient history; it is living revelation and the CD is available now at a holiday sale price. 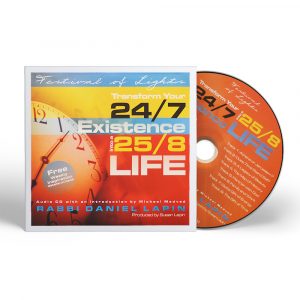 20 thoughts on “In Front of the Eight Ball”