There we were in a Tom Thumb supermarket in Dallas, the city we were visiting last week. My husband was speaking at a number of venues, and we stopped at the supermarket, which has an expanded kosher section, to pick up a few things.

The weather was hot; it was over 100°. In my view, that is perfect ice cream weather. Now, my diet plan (admittedly, not a very thorough one, though it serves double duty as a budget plan) decrees that I only buy ice cream when it is on sale. Fortunately, there was an amazing sale on a kosher brand with a scrumptious sounding flavor. We (I) scooped it up and made our way to the checkout where we were informed that we needed a supermarket card to get the special sale price. We do not live in Dallas. The supermarket chain does not exist where we do live. We did not want to stand at a customer service desk to get a card. The store, for a reason that eludes us, doesn’t allow the checker to swipe his own store card. I don’t pay full price for ice cream. Stalemate.

That is, until the checker turned to the woman behind us in line and asked if we could use her card. She immediately said yes and told us that she had been in exactly the same situation while visiting her daughter in S. Carolina. The problem was solved and the ice cream was delicious.

That should be the end of the story, but it got me thinking. That kind woman’s willingness to share her card would not necessarily be a universal response. A number of years back, researchers dropped wallets in shopping malls around the country. In some cities, almost all the wallets were turned in to mall security,  in others almost none were. There are places in the world, and I daresay places in the United States, where people are trained to be wary of strangers. Instead of helping each other, the first reaction is, “Why is this person talking to me?” or “What are they trying to put over on me?” Unfortunately, there are enough rogues out there who seek to repay friendliness with theft, and as they increase, human interaction suffers. In addition to that, in socialist societies, a direction in which we are sadly moving, citizens are encouraged to betray one another even as the ruling class mouths platitudes of compassion and comradeship.

A few months back, I was shopping at Costco. I love Costco and have been a fan ever since I discovered it over twenty years ago in Seattle. Leaving my Issaquah and Kirkland Costco stores was one of the prices of moving to the east coast. I quickly found that my new Costco wasn’t quite the same. Not only did I no longer enjoy stunning views of Mt. Ranier and Lake Washington during my drive, but the shelves weren’t stocked as well and the employees weren’t as cheerful and solicitous. Still, what was on the shelf was familiar, trusted, and well-priced.

Nonetheless, I was completely taken aback at my last visit. On a previous trip, I had purchased frozen peas. A few weeks later, I received numerous phone calls and letters telling me to please discard the (huge) bag as there was a health concern. I threw out the peas, and when I returned to Costco a month or so later, I put a replacement bag of peas in my cart. I told the checker that this was a replacement at which point he leered at me and sneered, “Right, yeah, you threw out a bag like this.” I have to admit that I was breathless at his insulting assumption that I was lying.

Now, Costco could have sent a certificate for a replacement bag in the letter informing me of the problem. But paying for a new bag wasn’t the point. The interaction drove home to me that I wasn’t in Kansas anymore (technically, Kirkland, WA where the company is based) and what I had perceived as the ‘Costco spirit’ didn’t travel to another location. Not surprisingly, I have pared back my membership and only sparingly shop there now in contrast to the Washington locations which served as pleasurable as well as utilitarian outings.

The two shopping experiences reminded me that much of what we take for granted, that makes everyday life enjoyable, rests on shaky foundations. Common courtesy can easily become a rare commodity and smiles can quickly transform into surliness. As more of us spend increasing amounts of time with technology rather than interacting with our fellow humans; feel betrayed by the government that is supposed to serve us; and obsess on our rights rather than our responsibilities, we take yet another step along a path leading to a less pleasant future.

Don’t miss our summer sale on The Ancient Jewish Wisdom TV Show Set.
My husband and I love taping this show and now you can own 12 shows for an amazingly low price! 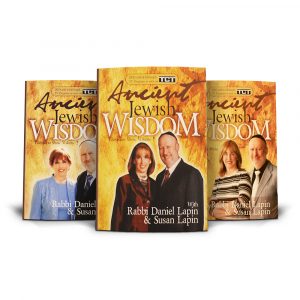