Whatever the outcome of this election, about half of all Americans will believe that it is not honest and accurate. After I wrote last week’s Musing, Anne commented, “Not liking the results of the election is not credible evidence [of fraud].”

I responded, “You are absolutely correct that not liking the results doesn’t equal fraud. However, just as in any relationship, when you sweep problems under the carpet over many years, you erode trust. There have been “irregularities” for decades that have been ignored. These go back to non-partisan problems, such as the need for identifying every voter but the Democrats yelled “racism” anytime they were brought up and the GOP cowered. Also, there was little political capital to be gained by fixing these problems. This resembles how repairing infrastructure doesn’t win credit for local government while handing out tax money for new programs does. Then, everyone sounds shocked when the bridge collapses or the water is polluted. It’s not a shock–it was ignored when it was easier to fix. […]You can’t allow mistakes/fraud/carelessness for years and then expect people to accept that everything is on the up and up, especially after four years of hatred.”

The integrity of our elections is not the only area where those with an agenda push forward deliberately while most Americans have their eyes elsewhere. It happened with education over the past sixty years, resulting in many highly ignorant and anti-American university graduates. And it is happening in health care now.

You can easily see two simultaneous trends: While veteran doctors are being frustrated, demoralized, and insulted, incoming medical students are being vetted for Leftist leanings. What do I mean?

If you pay close attention, you might notice that doctors have routinely been demoted to being called “health care providers.” This is a not-so-subtle attempt to denigrate the years of study and hard work they put in to achieve their degrees. The old Soviet Union had more doctors and health care facilities per capita than did the United States. They also had worse quality health care with worse results. I don’t think that was unrelated to the fact that being a doctor was not a terribly lucrative or respected position.

Yet, we are moving in that direction by increasingly treating many of our doctors like commodities. Their administrative bosses want to wring the most amount of work out of them with the least amount of respect for their education, instincts, and devotion. Doctor burnout is real and increasing. Here are two articles that are a small sampling of, literally, hundreds that you can find: Doctors Are Fleeing the Medical Field and Here’s Why and Burnout by a Thousand Cuts. When health care deteriorates over the coming years, it should not be a shock.

Meanwhile, the test that aspiring doctors need to take to gain entrance to medical school is changing. Would you prefer to know that your doctor has a firm grasp of biology, chemistry, anatomy, and other hard sciences or that they are able to correctly name all the growing varieties of gender? There are only so many test questions that can be asked.

The focus of medical school is changing as well. This year, the incoming Class of 2024 at the University of Pittsburgh School of Medicine composed their own class oath. It included these words:

“I will champion diversity in both medicine and society, and promote an inclusive environment by respecting the perspectives of others and relentlessly seeking to identify and eliminate my personal biases.

‘I will be an ally to those of low socioeconomic status, the BIPOC community, the LGBTQIA+ community, womxn/women, differently-abled individuals, and other underserved groups in order to dismantle the systemic racism and prejudice that medical professionals and society have perpetuated…

‘I will restore trust between the health care community and the population in which I serve by holding myself and others accountable, and by combating misinformation in order to improve health literacy.”

The doctors I prefer actually treat all patients with respect. I also want my doctors to take pride in belonging to a field that has had many outstanding individuals who have toiled, labored, and sacrificed to serve their fellow human beings. I detest the arrogance that sanctimoniously says, “Those before us were terrible but we noble and wonderful students are different.”

What happens once you are out of medical school, practicing as a nurse or a doctor and you are slated to take part in a procedure that you see as unethical? For decades now, abortion has raised this issue. Now, we must throw in gender-change surgery. What if you think this is a breach of your promise to help heal? What if you think this has less to do with medicine and more to do with Leftist indoctrination? Welcome to being labeled a bigot and possibly losing your job.

No one paying attention should be surprised that Americans are increasingly losing faith in our elections. When people like John Fund, who in 2012 wrote the book, Who’s Counting?: How Fraudsters and Bureaucrats Put Your Vote at Risk, were warning for decades that this was going to happen, it simply wasn’t of urgent concern for most of us. No one should be surprised that so many college students see free speech as a threat or that they support socialism. How many years will it be before we will be shocked, simply shocked, to discover that caring and competent doctors and nurses are increasingly difficult to find?

Now that I’ve grumbled, you might not believe it but I really am a Happy Warrior.
Are you? 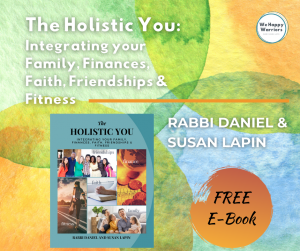 Get your free ebook today: The Holistic You: Integrating Your Family, Finances, Faith, Friendships & Fitness