Please stop trying to help mothers. This may sound like a strange request from a mother of seven, five of whose daughters are raising little ones right now. But, you see, when the government gets involved ‘helping,’ there are always unintended consequences.

Sometimes, ideas that sound good get implemented and turn out to have terrible consequences. By then, it’s almost impossible to revoke the damaging legislation. Invariably, one group is helped at the expense of another group. In almost all cases, people are forced to adjust their lives to fit in with what the government thinks is best for them rather than living as they think best.

Almost a year ago, I heard Donald Trump respond to a question about ‘women’s issues,’ by  saying that he would listen to his wife and daughter. At the time, it was the most poorly received answer to questions that were asked after he delivered a rather good speech. Mr. Trump didn’t recognize that in the conservative, mostly religious crowd to which he was speaking, ‘women’s issues’ were a code word for wanting to hear about pro-life policies. He also didn’t recognize how condescending it was to reference his wife and daughter as if ‘women’s issues’ should be dealt with over a ladies’ lunch. Finally, he gave the impression that he was toeing a liberal line, sounding awfully like he thought that all women think alike—liberal-minded, of course.

His daughter, Ivanka, who in many ways is, along with her brothers, one of the most appealing parts of the Trump candidacy, seems to be acting out the promise I heard. In her speech at the Republican convention she spoke of making childcare more accessible and now, the candidate himself is raising the issue. Ivanka further explains her views in a recent Wall Street Journal article.

I understand that Trump fares badly in the polls among women, and especially among young women. Whether or not advocating government paid maternity leave will help him, I don’t know. After all, it is Democrat-lite. Why should a woman settle for the promise of six weeks if the opposing candidate is promising twelve? But, that is for his campaign advisors to parse. My message is about the reality of life, not about winning elections.

You see, I would like to address myself to Ivanka and other young women to whom government paid maternity leave sounds like a good idea. I assume you are not naive enough to believe that this program will be paid for by cutting out fraud. In your own life, I hope you don’t spend money, telling yourself that you will cut corners and dig yourself out of debt that way. First you cut the corners, then you might find that you have some extra money to spend. And, of course, you can’t allot money you have saved to twelve different things you would like. Extra money tends be hard to come by and runs out rather quickly.

But let’s assume that this program is something our overly indebted nation can afford. Let’s make an even greater leap of logic and think that once paid maternity leave is available to anyone whose company doesn’t offer it, that companies who presently offer it will decide to be chumps and keep offering it themselves. Let’s even posit that once day care is a government entitlement, day care rates won’t skyrocket. Let’s just focus on whether this is a good idea for families.

I’d like to take you through a few generations of my own family. I don’t think it is dissimilar to the experiences of many others. My grandmother immigrated to this country before World War I and married another immigrant. They had five children and no close relatives, family fortune or other well-established support network. My grandmother had to work. Many in her circumstances did piece work at home or found other low-paying work that accommodated their family needs. By working hard, my grandparents raised their children successfully. While the boys went into the military and fought during World War II, their daughters had the luxury of a college education. All the children thrived economically to a greater degree than their parents did.

My mother stayed home with my sister and me, while my father supported the family, not lavishly, but perfectly adequately on one salary. While my father had a college education, my friends’ fathers who did not, were able to support their families as well.

I was pretty young when Betty Friedan’s book, The Feminine Mystique came out. By the time I was a teenager, the culture’s message was to feel sorry for intelligent, competent women like my mother for having been forced into a motherhood box at the expense of self-fulfillment. Women should have all options open to them was the message of the day.

By the time my children were born, my friends and I knew that we could be whatever we wanted to be. We opted for staying home with our children and were sometimes looked down upon for making that choice. There was clearly a preferred choice vs. the idea that each individual should do what was best for them. However, the economics of the country still allowed us to decide for ourselves.

Now, I am watching my children and their peers raise their own families. For most of them, the choice is gone. Like my grandmother, their families can’t manage on only their husbands’ salaries. Unlike my grandmother they speak English fluently, they are college graduates, and they have an established network in this country. Yet, while they may be earning more than their great-grandmothers did and their work may be more respected, they do not have the choice of focusing on their families.

Why is this? It is not because they are insisting on lavish lifestyles. More than one of these young women is working to acquire health insurance benefits, because of taxes and because prices have been inflated as the expectation of two-income families became the norm. Many of them have fantastic childcare options. Nonetheless, they do not necessarily want to work during these years. They are working under financial duress.

You, Ivanka, have built a successful business and are a talented woman. I’m sure that you are a caring mother and have confidence in the people helping to care for your babies. There are most likely days that you wish you weren’t running out the door and days that you relish the challenges of your work. But it is your choice. You can afford higher taxes and higher medical insurance premiums if necessary. Your budget doesn’t get busted when cereal packages get smaller while the price stays the same, partially propelled by the cost of added government regulations.

That is not true for the young women I know. All those expenditures force them to go to work outside the home. I prefer allowing everyone to make those decisions for themselves. If someone chooses to have a child without the support of a husband, that doesn’t mean that the government must step in to help. If someone immigrates to this country, they should want it badly enough to know that they will work hard and their reward may be in seeing the next generation do better. If a married couple chooses to have one child or ten, they should know that they will live with the consequences of that decision, both financial and otherwise.

You yourself recognize that a policy that discriminates against stay-at-home moms is a problem. Solution? We’ll give them money too! Ivanka, when my children were younger I often cut their hair myself. Invariably, one side was shorter than the other necessitating extra snips on the longer side. Naturally, I then needed to fix the other side. It’s miraculous that my children didn’t walk around bald (do not believe them if they say they did). The government is a worse barber than me.

The more the government gets involved ‘helping’ certain people, the more freedom of choice they strip away from everyone. So please, if offering government paid maternity leave is a cynical decision to buy votes, I don’t have much to say. But please have the humility to recognize that, like so many other well-intended failed programs have done and continue to do, you may be hurting as many or more people than you help.

Please check out our sale on Buried Treasure: Secrets of Living from the Lord’s Language.
Now is a great time to acquire a copy of this widely-acclaimed book. 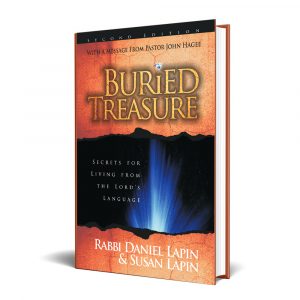