Quick! Is this a complimentary statement or an insult? “Behind every great man stands a great woman.” I’ve been doing a great deal of thinking about this phrase. How exactly do I feel about it?

While I haven’t tried this experiment, I conjecture that if you asked college students what they think of those words, most would dismiss it as a relic of patriarchy. After all, it reeks of a time when women weren’t expected to be great themselves but only support staff. A variation of the saying is , “Behind every successful man there is a woman,” but this only emphasizes the potential problem even more. (For the purpose of this conversation, I am going to focus on wives rather than mothers, not because I underestimate maternal influence but because that’s a different discussion.)

Reading a mesmerizing biography by Sonia Purnell; Clementine: the Life of Mrs. Winston Churchill, started this train of thought. The book quickly reveals that Mrs. Churchill played a significantly more involved and complex role than that of supportive spouse. In World War I she organized and ran the establishment of canteens for soldiers, which to me sound similar to the American USO. In doing so, she supervised a huge staff and budget. In World War II she initiated a massive campaign to support the starving Russian people, acting not as a figurehead but as a hard-working and extraordinarily competent businesswoman.  As for supporting her husband’s pivotal leadership role in World War II, among other accomplishments she edited his speeches and, unlike Eleanor Roosevelt, was consulted on major decisions, including those involving classified military information. 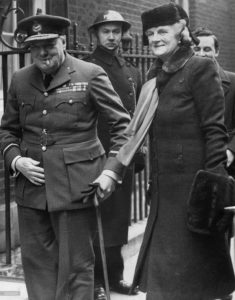 However, other people could have occupied most of those roles. She uniquely supported, challenged, protected, coddled and fought with her husband through the vicissitudes of his career. It is entirely plausible that without Clementine, Churchill would have floundered and self-destructed, leaving him unable to save England and the world from Hitler. Yet, Ms. Purnell’s book is groundbreaking. While Winston Churchill is the subject of numerous biographies, his wife’s role, until now, occupied little space in the narrative.

Granted, Winston Churchill is a unique larger-than-life character. His eccentricities and flaws were matched by his massive strengths and far-reaching foresight. It isn’t surprising that he needed an incredibly talented and complex woman to provide ballast to his life. Furthermore, the epic battle  of good against evil in the 1930s and 1940s provided a dramatic, world-shaking backdrop to his life.

The Churchill’s marriage was, like the individual lives of the two spouses, fiery, tempestuous and strong. England benefited while their children did not. While I don’t view it as an ideal role model for marriage, and in fact Mrs. Churchill suffered physically and emotionally from the stress of living with such a difficult man, it is arguable that Winston Churchill’s greatness and the defeat of Nazism is a credit to his marriage as much as to his own persona.

Clementine Churchill was greatly overshadowed by Winston, exemplifying the sentence with which I started this Musing. Yet, I think she just as aptly represents the phrase in Genesis claiming Eve’s creation as an ‘ezer k’negdo,’ literally, ‘a helper as if she was opposite him (Adam)’. Not a mindless yes-woman but someone who helps to bring out the best in her husband by completely being on his side, yet skillfully exposing him (sometimes forcefully) to different perspectives, emotions and ideas.

Our society currently devalues marriage and its unique partnership paradigm. Could it be that our modern insistence that the individual is more important than the couple and that wives should tread their own independent paths make it less likely that our society will produce either great men or great women? Is there a happy medium?

50 thoughts on “Behind Every Great Man…”